Shortly after posting NAWWA will provide Balance and Equilibrium in the Articles section, the Founder realized this write-up provides a good example of why the White Americans need representation among the other racial categories of people in America. As previously explained, the appropriate representation will give the White Americans a voice by which they can express their opinions on matters pertaining to them. One such instance is as follows:

Back in January 2016 the Founder read a newspaper article published in the Houston Chronicle about a meeting held in San Antonio, Texas, by the National Collegiate Athletics Association (NCAA). At that time, NCAA president Mark Emmert was determined to give student athletes more free time and to also improve on minority hiring.

In regards to the minority hiring, the lack of Black or African American head coaches at the FBS college level was noted as an area of concern for Emmert and the Association. Of the 27 FBS coaches who had been hired in the NCAA's most recent cycle, only 4 were Blacks or African Americans.

But, when the Founder read the newspaper article referred to above he thought the greater area of concern for the NCAA should have been with the disparity in race between the athletes rather than with the head coaches. This is because the Founder understood the primary purpose of the NCAA is for the welfare of the student athletes and not necessarily the head coaches.

Emmert acknowledged that an NCAA mandate similar to the NFL's Rooney Rule wouldn't work in selecting the head coaches because of different hiring practices by public and private institutions. (However, and even though it wasn't mentioned in the letter the Founder sent to the NCAA, the Founder does not completely agree with Emmert's position on this point either because the Rooney Rule had been adequately serving its purpose in professional sports which is an institution in itself. And, a variation of the Rooney Rule at the collegiate level would have been better than nothing at all.)

At this juncture, the Founder also wants to make it clear that he does not have a problem with the Blacks or African Americans requesting that more minorities be hired as head coaches at the colleges. In fact, the minorities have every right to make these requests. And, the representation provided to them by their racially-named organizations gives them even more support in their endeavors.

While the basis for requesting that more minorities be hired as head coaches is a valid claim there is, however, a flip-side to such claim. And, the flip-side to this claim consisted of the Founder requesting that more white athletes be placed on the teams which are being coached by the head coaches. The reason for this request was because when watching any college football or basketball game, it can be seen that there is a huge disparity between the ratios of the black and white athletes who are participating in the aforesaid sports. Because of the disparity involving a larger number of black athletes, the white athletes are not being given the same opportunity as the black athletes and this is not fair. As the reader should already know, the opportunity for the athletes is not in just playing the sport because the ultimate opportunity is in obtaining a college education and the benefits associated with a college degree. This was pointed out in the following letter that the Founder sent to the NCAA back in January 2016:

After reading the article titled Emmert sees progress, area of concern that was published in the January 15, 2016, edition of the Houston Chronicle (see attachment), I think a greater area of concern by the NCAA should be with the disparity in race between college athletes rather than just with the coaches themselves. This is especially the case in college football and basketball.

For instance after watching any college football or basketball game and then referring to the U.S. Population Race Pie Chart presented below, it can be seen that there is a huge disparity between the ratio of Black and White athletes who are participating in the aforesaid sports. 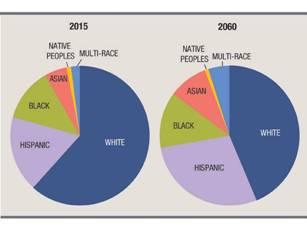 Of course, it's acceptable for the NAACP or any other minority advocacy groups to express their concern over race and, I'm sure that anyone who reads this letter will label me as a racist since I am white. But, the facts remain very plain and simple in that white athletes are currently not being given the same opportunity as black athletes and this is not fair. The opportunity is not in just playing a sport because the ultimate opportunity is in obtaining a college education and the benefits associated with a college degree. And, according to the above Pie Chart, the problem with disparity between races will only get worse by year 2060.

So, what can be done to correct the problem? One consideration could be for the NCAA to step up to the plate like how the NAACP and other minority advocacy groups do by defining limits or quotas for the number of participants from each race something like the NFL's Rooney Rule you referred to in the newspaper article.

Another consideration could be for someone to form a new advocacy group for protecting the rights (or interests) of whites, much like what the NAACP has done for blacks, so that such group could then request the NCAA to correct the problem. This approach would protect the NCAA from any race-related issues. I would be happy to start such a group if I knew it would help solve the problem.

In closing, it is important for me to emphasize that my concern is based solely upon establishing and maintaining fairness and equality between all races. Therefore, I sincerely think that only a racist would call me a racist in these respects.

Please let me know your thoughts on the above.

Of course, and to no surprise, the Founder never received a response to his letter from the NCAA.

But, the point that the Founder was trying to make to the NCAA is that there are two sides to just about everything, including a story, a request, and whatever else it may be. And, similarly, for just about every claim there can be a counter-claim. Thus, in the Founder's opinion, it was just as reasonable for the White Americans to request that more white athletes be given scholarships to play on the college teams as it was for the Blacks or African Americans to request that more black head coaches be hired by the colleges.

In closing, and in reiterating what was stated at the end of the letter sent to the NCAA, it is important for the Founder to emphasize that his concerns are still based upon establishing and maintaining fairness and equality among all of the racial categories of people in America. And, if anyone disagrees with this concept, then the Founder again thinks that only a racist would call him a racist in these respects.

Thank You for Supporting This Project